The Art Of Finding Virtues In Others

Whether or not you choose to see it, there is good in all of us. Rather than putting all your energy in finding the bad in a person, try to focus on finding virtues. After all, isn’t that what you’d want people to do for you, too?

Looking For The Worst In People

If your mission in life is to look for the worst in other people, certainly you will find it. You’ll also end up very lonely.

Social media, news websites, even casual conversation. No matter where I turn, look and listen, negativity – especially negativity about people – is everywhere.

I realize this isn’t really new information. I’m not saying anything particularly profound.

But maybe that is what’s so irksome about it.

So-and-so said this. So-and-so did that. My, what a terrible person for having said this or done that.

As if that’s all that person is.

But if that’s all So-and-so is – if that is the entirety of his being or her character – what does that say about you? Are you only the worst things about you? Is that how you want to be defined? Is that all you would want anyone to think of you? 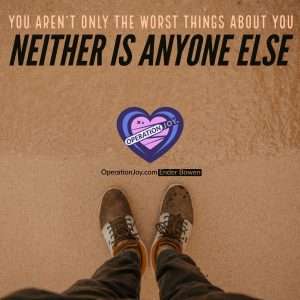 I highly doubt it.

I wonder sometimes why we waste so much energy on looking for the worst in people.

Perhaps we don’t like So-and-so to begin with, and then we try to find as many things as we can in order to justify our dislike.

Maybe So-and-so did something we didn’t like to start with. Maybe he took a position that was counter to our own. Maybe she said something that rubbed us the wrong way. So we made our conclusions and, once again, dove in to further justify them.

Is there nothing redeemable about So-and-so?

By extension, is there nothing redeemable about you?

Again, I highly doubt it.

So what can we do to take that energy we’ve been using to find the worst in someone, and learn how to find the best in them instead?

Finding Virtues In Others – A Simple Method

There’s a very simple way to learn how to channel your energy from looking for the worst in others and, instead, putting that energy into finding virtues.

Write down the name of someone you dislike and list at least 3 of their virtues. 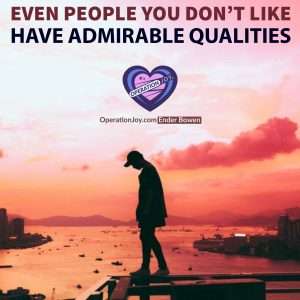 I imagine you’re groaning or rolling your eyes right now.

“Do I really have to try and find good things in this person?”

What’s so terrible about finding the good in someone? What are you afraid to lose?

“Well… why can’t I just pick a random person and list three of their virtues?”

You could, but where’s the challenge in that?

The point is to get you to see that there is good in everyone, and you’ll see that more clearly if you find it in someone you don’t like. Even more so in someone you absolutely disdain. This mission is also meant to give you a wake up call and show you how hard it is to find the good in people when it really should be the easiest thing to do.

If you’re having a hard time, try starting with something a little easier: list one or two things you can respect about the person. Once you can do that, it will be a lot easier to start finding virtues. 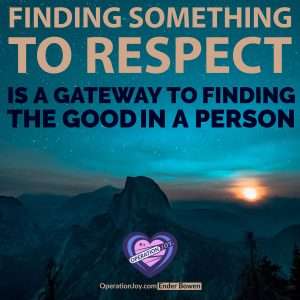 It’s also about understanding more clearly the hypocrisy in your own heart.

When all is said and done, you may find yourself pleasantly surprised. You may also find that you have plenty of hidden virtues, too.

Do you have advice on finding virtues in others? When have you been surprised at the good you found in a person? Have you had success with this particular mission? Please share your story!