Be More Productive By Dropping The Word “But”

If you want to be more productive, the first thing to do is listen to what you’re saying.

“There’s a project I wanted to work on tonight, but I’m just too tired.”

“I really want to learn how to make an amazing dinner, but I don’t have the time.”

“My friend invited me over and I want to go, but it’s too cold outside.”

“I want to go see Rogue One, but the cats puked on the floor, the dogs peed on the couch, the baby needs to be changed and no one’s even checked the mail yet!”

Here’s one that I sometimes find myself saying: “I want to write a blog, but I just don’t feel inspired.” (That includes this blog, and that was even when I already knew what I wanted it to be about!)

There is probably never a day where you don’t say the word “but”. And while that may not really seem like such a huge deal, I’m here to tell you that, in actuality, it is.

Nothing stifles your own productivity more than the word “but” (and Star Wars marathons). The more you say “but”, the less motivated you become and the easier it is to keep being unmotivated. It puts a stranglehold on your ability to move forward and reach your goals. And it even has the power to convince you whether or not something is truly important to you.

So you may say you want to work on that project, but clearly getting some sleep or relaxing is more important to you.

You may say you want to learn to cook that amazing dinner, but you don’t really want to make the time to do it.

You may say you want to visit that friend of yours, but that’s not as attractive as staying home.

“But” makes you your own worst enemy.

“Wait, Ender, I really do want to do those things!”

Heck, I’d even go as far as to say do them when you’re probably not supposed to be doing them. I mean this more symbolically than literally, but the point is if you’re doing something when you aren’t supposed to be, that must mean you really want to be doing it.

I realize this is all very easy to say, so how do we make it happen?

In the art of improv, there’s a long-held tradition (some would say it’s a hard rule but others often teach it as a method), that you never say “but” or “no”. To do so would negate what another actor is bringing to the sketch, and in fact puts the scene in danger of collapsing altogether. You never negate another improv actor’s contribution – you accept it as a fact of this world you’re building on the fly. 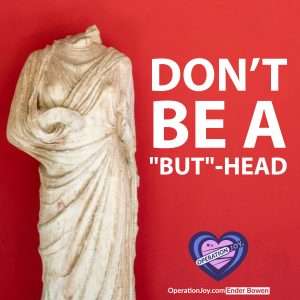 This is where “yes, and…” comes into play. By saying “yes, and…” you are accepting what the previous actor has contributed to the scene, and you are preparing to do something with what has been given and contribute something yourself, building on what came before and taking it to the next level.

While what I’m suggesting you try here isn’t necessarily the same exact thing as “yes, and…” in improvisational acting, it’s still a concept that you can try and transpose to your “but” problems.

Yes, I giggled a little bit at that, too.

If you’re having a bit of trouble dropping the word “but”, try replacing it with the “yes, and…” method.

So, yes, I want to work on that project tonight, and here is how I’m going to do it.

Yes, I want to learn how to make an amazing dinner, and here’s how I’m going to go about making that happen.

Yes, I want to go see my friend tonight, and here’s how I’m going to get there.

Being Responsible For Your Own Productivity 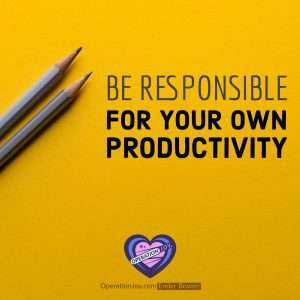 In other words, if I want to write a blog, then it’s up to me to make that happen. I am responsible for accomplishing this goal. In the very least, I’m accountable to myself.

That means if you really want to be more productive, the first person you are accountable to is you!

The Difference Between Internal And External Obstacles

Internal obstacles are often excuses you make for yourself, where you compromise your own ability to accomplish the things you want to do. Sometimes those originate out of fear, (which is still internal), and sometimes they come from a lack of motivation to see things through. They often can masquerade as external obstacles (ie: “I don’t have time” or “I’m too tired”). As we get older, internal obstacles get more difficult to overcome. But they can be overcome with the “yes, and…” method, as noted above.

External obstacles are naturally harder to deal with. As it happens, modifying the “yes, and…” method works for these, too. We just add “even though…” If you really are tired or you really don’t have the time, these are then external obstacles. And we would apply this modified method to them.

So, yes, I want to work on that project tonight, and here’s how I’m going to do it, even though I’m really very tired.

Yes, I want to learn how to make that amazing dinner, and here’s how I’m going to do it, even though I don’t have a lot of time to do so.

Using the “Yes, and… even though…” method helps you think through those external obstacles. So you can accomplish those goals and do the things you truly want to do.

It even helps you to compartmentalize when you have many obstacles in the way. So you can take each one by one, rather than all at once.

It’s In Your Own Power To Be More Productive

In the end, if you have things you want to do, goals you want to accomplish, and projects you want to be involved in – or if you want to see your son’s soccer game, exercise more or eat better foods – you absolutely must stop being a “but”-head. By removing this word from your daily routine, you are forced to think critically, open up your mind, point yourself toward achievable success, and just plain do!

And if you do, you will find that you are getting more things done (and quicker), getting inspired more easily, and genuinely enjoying your day more often, for longer periods of time.

But, remember, it’s entirely up to you!

Have you tried removing the word “but” from your vocabulary? What were the results? Was there a noticeable change in your productivity? What other words and phrases might you stop using in order to be more productive? Share below!