How To Pragmatically Realize Your Dreams

In order to make your dreams come true, you need to bring your “idealized dream” more in harmony with the resources you have available right this moment.

Where Does The Time Go?

When I was fifteen, I wanted to be the next Bono. Many of my friends, my wife and my family would actually argue that I still want to be the next Bono. And there may be a shred of truth to that. Maybe more than a shred. After all, besides being one of the biggest rock stars of all time, Bono does so much to advocate for the less fortunate. He is a constant voice and a representative of the voiceless. He uses his gigantic influence in the pursuit of a grand cause – essentially using the blessing that he’s been given to the benefit of those who truly need it.

For someone like me – a person who wants so much to help others, to offer hope where there might be little – Bono is quite the role model.

Of course, at fifteen the “helping others” thing – while somewhat-existent in my head – wasn’t at all my primary focus. I wanted rock stardom, fame and celebrity. I wanted my name to be known all over the world and to have the same – or better – experiences as Bono.

Where does the time go?

And yet, I haven’t given up. Even after twenty-two years. I have a house, a mortgage, a family, and I’m often struggling to pay the bills, but I’m still trying to make it happen.

And that’s not easy. Back when I was fifteen, or even in college, the whole enterprise seemed not only plausible but entirely possible. Even though I didn’t have many resources at the time, I completely believed – as one might – that I would come into those resources eventually.

But, despite the fact that I’ve had some opportunities that have come and gone and some experiences that I could take or leave, those resources never really came to me. Nor I to them. And as time has marched on, I’m not only finding those resources harder to come by, I’m finding it difficult to hold onto the ones I already have.

That’s what happens as you get older, as you come into more responsibilities. The resources for making your dreams come true start to dwindle, mostly because the majority of your time and energy is being devoted to just making the home machine run. You need to take care of your family. You need to make sure the power stays on. You need a Starbucks. (Okay, I need a Starbucks). You need to make sure you’re bringing in enough money to pay the bills and to provide as much as you can for the people you love the most.

Meanwhile, you get frustrated. The older you get, the further and further your dreams appear. Here and there, when you have time, you try to work your passions into your day, laboring desperately to move things forward so that you can still, one day, be that mega-star, or that New York Times bestselling author, or that fashion designer – whatever it is you have always wanted to do.

You don’t have to tell me that’s going nowhere. I already know.

And that’s likely because you’re still dead-set on the idealized dream. You know, the one you envisioned when you were fifteen.

When I was fifteen, I was conducting mock interviews with myself as if I was being asked questions by Rolling Stone. I was inventing songs in my head (but never writing them down because, at the time, I didn’t know how to play most instruments. After all, I was a drummer, not a musician). I was designing cassette tape album jackets for all my future albums and even writing my Grammy Award-winning acceptance speeches. I designed a tour, and a theme around that tour.

And I even – this one is a bit batty – started writing a memoir as if I was my future self telling the story of my legendary career.

Yeah, I was committed.

Or maybe I should have been.

But, again, I’m not fifteen anymore. And apart from having learned to play a lot of instruments and to record music, and having released a few albums in my lifetime, none of those other idealized dreams have come true, nor are they even close to coming true anytime soon.

Knowing this, knowing that the resources I have at my disposal are dwindling, and knowing that I have less and less time in my day to devote to growing or finding more and better resources, why would I keep trying to focus on realizing a dream that’s so gigantic and, truthfully, unrealistic?

Even at fifteen, I knew those dreams I had were not going to come true the following day. I knew they were going to take a lot of time, a lot of work, and it was going to be a process coming from the bottom and working my way up. I had no problem with that. I was more than fine with doing the work and earning my way.

At fifteen, that was okay with me. After all, I had nothing but time. I had no real responsibilities.

But at thirty-eight, that’s obviously not okay anymore. Not only do I not have that kind of time, I haven’t the resources to do anything with the time I have, much less be able to grow them or get me toward that ultimate, fifteen-year-old’s idealized dream.

You should never give up on them. Your dreams – your passions – exist for a reason. But no matter what you do, you feel stuck – like you can’t even get the dream machine off the ground.

And if you can’t get the dream machine off the ground, how in the world are you supposed to get it from here to there?

If you’re at this point – whether in your thirties, forties, fifties or what-have-you – you’re seeing the writing on the wall. You know just as well as I do that “working your way up from the bottom” is not a realistic strategy anymore – not with the kind of time, responsibilities and resources you have.

Conventional wisdom suggests that now is the time to give up. After all, the chances that your idealized dream is going to happen are pretty slim.

Of course, that was always the reality. And yet, you’re still focusing on that idealized dream as being the goal. And you despair at the idea that you could never possibly get there. Certainly not from where you are right now.

And while you had many tomorrows available to you at fifteen, you know you don’t have nearly as many of them now. You feel like you’re running out of time and the dream is slipping away.

The problem is that the idealized dream – the one you’re aiming at – is not consistent with the reality you live in. Truthfully, it never was. But it certainly isn’t now. Not with the time and resources currently available to you.

That picturesque version of your dreams that you’ve got stuck in your mind is completely at odds with the resources you have available to make them come true. There’s an extreme distance between the resources you currently have at your disposal and the resources needed to bring that ideal dream to life.

That is the Dream Divide.

In order to make your dreams come true, we need to bring that idealized dream down to reality and pull it more in harmony with the resources you have available right this moment. Like I said, you don’t have as many tomorrows left to you now as you had when you were fifteen. So we’re not interested in doing this three, five, or ten years from now.

And the smaller we make that Dream Divide, the more likely it is we’re going to be able to accomplish that task.

How can we get started on making this Dream Divide smaller?

Write down the ideal version of whatever it is you have always wanted to do. Cross off the parts that are unrealistic. 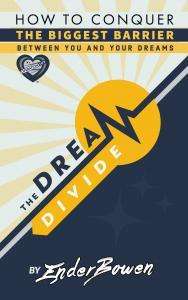 But wait a second, Ender! Isn’t this counter to everything you purport yourself to be about? How could you possibly be telling me to cross off pieces of my dream when realizing dreams is basically the main thing you keep trying to help people do?

Well, that’s easy, I want you to realize dreams, not just dream about them.

At the time of this writing, I’m nearing thirty-nine. It’s highly unlikely that I will realize my dreams as I envisioned them at fifteen. This is just as much because of the resources I have available now as it is because those dreams were never realistic to begin with.

And that’s okay. That doesn’t mean I was wrong to have them. It doesn’t mean I should give up on them, either. It just means I need to condense them, make them more practical and get them more in line with the resources I currently have available.

Once you sit down and cross off those parts of your dream that just aren’t realistic and you don’t have the resources to accomplish, you’ll find you have something much easier to work with. Something much more attainable. And when all is said and done, actually represents the core of why you had those ideal dreams in the first place.

If you truly want to understand your full potential, this is one of the key places to start.

But crossing things off is just the beginning…

If you want to dig deeper into the Dream Divide and learn how to make it work for you, my book The Dream Divide: How To Conquer The Single BIGGEST Barrier Between You And Your Dreams is what you’re looking for!

And much, much more!

Ultimately, you’ll decrease the size of The Dream Divide and thereby make your dreams come true in a quicker and much more realistic manner.

Get the book today to learn how!

Parts of this article were originally published in Operation: Joy – 30 Daily Missions To Inspire Joy In Yourself & Others and The Dream Divide: How To Conquer The Single BIGGEST Barrier Between You And Your Dreams.