How To Turn Roadblocks Into Speed Bumps

Though it may not look like it at the time, the roadblocks in your life are a gift.

When Roadblocks Ruin Your Plans

This past Monday was supposed to be a full, free day to get some things done – from job hunting to cleaning, marketing to social media networking, blogging to music mixing. I had arranged for Addie to go to her frequent babysitter’s for the day, and I had my schedule all laid out.

Then, at roughly 5AM that morning, I heard a loud crash – loud enough to send the three nearby cats scurrying in panic from our bedroom. Curious, I got up to look around. After a good ten-to-fifteen minutes checking the bathrooms, the living room and the downstairs (assuming the absent fourth cat had knocked something over) and coming up empty, I decided just for the heck of it to check the laundry room.

It was an absolute catastrophe. Like an EF5 tornado had whipped itself through.

Apparently, one of the shelves that runs from one end of the room to the other had collapsed, dispensing everything that had been on top of it – empty boxes, dirty clothes from a basket, tools, breakables (like glass), lightbulbs (including CFLs) and other random items – to the floor below. Nearly anything that was breakable was not only broken but shattered into pieces. With the possible threat of mercury in the air from the broken CFLs, I sealed up the room as best I could and recommended Emily not go in there. I then went back to sleep and got up with Addie in the morning, taking her to her scheduled baby sitting appointment.

When I returned to assess the damage and what it was going to take to clean up and fix, it was rather obvious what I was going to be doing with my whole day. In fact, I actually had known that from the moment I had originally opened the door. I threw out the day’s intended schedule, sighed, and went to the task at hand.

In all reality, cleaning the room and fixing the shelf should not have taken the whole day, however, I had to be very careful with the broken CFLs; I had to spackle the holes from the old screws that had held up the shelf (they were, in some cases, nearly the size of a dime) and drill all new ones; I had to fish out items that had fallen behind the drier (which took two hours – in the end I utilized my grill tongs to get the hardest-to-reach items out, but that was still a chore); and I had to get the shelf itself back up (which wasn’t easy), assess what it could handle for a load and then put back onto it far less than had been sitting on it before. The rest of the stuff had to find a new home – in most cases in the garage. On shelves. 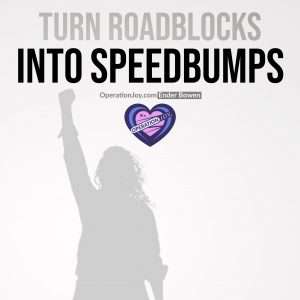 After all of this was done and Addie was back home with her mother, I was supposed to go to band rehearsal – which would have been a relieving way to end the day after taking in all that I hadn’t done. As it turns out, however, Addie was not feeling good (she was coughing and hacking pretty good) and I was exhausted from cleaning and fixing. I decided that it would be better for me to stay and help take care of my daughter.

But it didn’t end there.

Taking Care Of Another Roadblock

About half an hour before Addie was to go to bed, she took a tumble behind the couch, went face-first into the windowsill and put a tooth into her bottom lip. Though there was a lot of blood and she was screaming for a good five minutes, the bleeding quickly stopped, she relaxed (she’s a tough kid) and we assessed that she didn’t need stitches – it was a rather small cut, after all.

I’m glad I was home to help ease the panic. I don’t mean to suggest Emily couldn’t have handled this alone – she could have, but it wouldn’t have been easy. Like me, she would have had alarm bells going off in her head that made her feel like she was not doing enough or maybe was missing something or – without another pair of eyes – become freaked out at the idea that the injury was more serious than it really was. It helps to have the other parent there when these things happen.

The Roadblocks of Life

The reason I’m presenting this story is because I know, in some respects, that you’ve been here too. You’ve had everything put properly into place and scheduled, time carved out for you to do those things you either wanted or had to do, and somehow, some way, something unexpected tried to block your path. Maybe it was a change in the weather; an uninvited guest; or an accident. Or maybe it was a failing piece of equipment (kind of like a collapsed shelf); writer’s block; or being called into work.

Just this past week I sat down to record several parts for various songs and spent all my time on one. Which I didn’t even keep. Because guitar strings. On more than one guitar. Irate. That’s all.

In any event, these are the roadblocks of life. They happen. There is no avoiding them. There is no ignoring them. You have to deal with them.

Empower Yourself By Conquering Roadblocks

But you don’t have to deal with them forever. No one says you have to enjoy them, necessarily. But there’s only one person who decides whether or not they are a real problem. It’s up to you to decide that these aren’t roadblocks, after all – they’re merely speed bumps. You can get over them and get by. You have to slow down and take care.

But you don’t have to stop.

There’s something incredibly empowering in conquering the things that block your path. They don’t own you. You are their boss. They are more malleable than you.

And in the end, though it may not look like it at the time – trust me, I know this all too well – these would-be roadblocks are a gift. Not just because they present a challenge that you can overcome (thus making you stronger), but because they add to your experience. They help make you more of who you are. They become a part of your journey and your story.

So when you see that roadblock up ahead barricading your intended path, relax. Grip the wheel. Be resolute, but patient. Keep moving forward. Take a deep breath.

When have you been confronted with unplanned roadblocks? Did you defeat them? If so, how? When has a roadblock completely stopped your forward progress? What might you have done to conquer it? Share below!