Are You Ignoring Joy?

by Ender Bowen / Wednesday, 27 January 2016 / Published in Inspire Yourself

It’s in our nature to think that because we haven’t “arrived”, because our dreams haven’t yet come true, we don’t really have anything to enjoy. But that’s how you may end up ignoring Joy.

This past weekend, most of the country was buried under the accumulated snowfall of one of the largest winter storms I’ve seen in quite some time. From what I understand, places like Baltimore got over 30 inches, while DC could count up to about 27. It may have even been more than that.

Here in Nashville, Tennessee, I was able to measure almost 8 inches. For a town not used to anything more than a light dusting now and then, what got dumped on us Friday the 22nd was nothing short of a virtual apocalypse. Roads were closed everywhere. Many companies sent their employees home early or asked them not to come in at all. Schools were closed even before the first snowflake fell. As of this writing the garbage still hasn’t been picked up. And you’d be lucky to find even a crumb of bread, much less any milk or beer at most grocery stores.

And I don’t think I need to tell you about the amount of flights that were canceled.

Finding Joy In The Snow

While Friday may have been a difficult – even downright terrible – day for many, it was an absolute joy for me. No, it’s not because I come from the north where this kind of storm is really not much to talk about. It’s because I got to spend the day with my wife and my daughter. 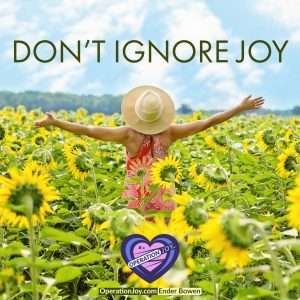 I got to see little Addison’s face light up when she saw how much snow was on the ground.

I got to watch my wife and daughter go sledding down the hill together – I even had a chance to slide down with Addie myself. And I marveled at how determined Addie was to try and carve her own sledding path in the hill despite the fact that she’s a few weeks short of two years old.

We threw snowballs. Addie giggled at each one that hit her.

We laughed when we couldn’t pack up enough snow to start a snow man.

We sipped hot cocoa, watched television and cuddled up on the couch together.

I got to see my wife smile and laugh, completely alive in the moment – in the here and now.

But we got to have it. I hope we weren’t the only ones.

Why Ignoring Joy Can Be So Easy

There’s a good chance, if I were already hugely successful with the things I want to do, that I wouldn’t have been able to experience any of this. It’s entirely plausible that I may have been somewhere else or, at the very least, required to leave the house. I might have been on the roads, or stuck in a strange city with no idea when I might get a flight home, or I might even have been nice and warm and cozy, albeit in some office or studio.

It’s in our nature to think that because we haven’t “arrived”, because our dreams haven’t yet come true, we don’t really have anything to enjoy. But that’s a terrible way to live. In fact, it’s not living at all.

That’s how you end up ignoring Joy.

The truth is, perhaps you haven’t yet realized your dreams or become the success you always thought you’d be by now because there’s still some stuff you need to enjoy before all of that happens – moments you wouldn’t get to have if you were otherwise engaged.

We need to learn to stop, change our focus, and become truly aware of the Now, because Now doesn’t last forever. The passing of time causes our most beloved memories to become blurry and vague.

Do you really want them to start that way?

Or do you want to open your eyes and accept the blessings you are being given?

Right now, we don’t have a lot. I haven’t been working consistently. Money has been hard to come by. It’s been difficult to pay the bills. And we don’t know how we’re going to raise this family, let alone take the next steps toward reaching our goals.