Do You Ask Or Do You Demand?

by Ender Bowen / Monday, 13 August 2018 / Published in Inspire Yourself

Do you tend to ask, or do you tend to demand? Try this simple task to find out, with additional thoughts on what you discover.

The Demands Of A Child

My four year-old daughter has become pretty demanding in the last year or so. It used to be, when she was sweet, innocent little Addie, she would sweetly ask for something that she wanted.

“Lemonade!” (not like “hey look there’s some lemonade” but “gimme lemonade, peon!”)

Or my favorite: making a random noise and simply pointing at the thing she wants.

She doesn’t ask. She just demands. And, of course, we promptly take her aside and explain to her that that is not how we behave. Say “please”. Say “thank you”. Be kind and respectful. Sure, she’s all good and follows those rules for the next twenty minutes, but then she’s right back to her demanding ways.

It’s frustrating, but it’s easy to spot. I mean, here she is – a child. This is what children do. So we’re already on the lookout for it.

But, as we aren’t children, we aren’t looking for it in ourselves.

As adults, we tend to make pretty good children ourselves. We just don’t often pay attention to the ways in which we might resemble them. The truth is that we do more times than we know, or care to know. And as a result, we don’t really do much about it. How could we – it’s not like we’re deliberately looking for these childlike behaviors in ourselves. 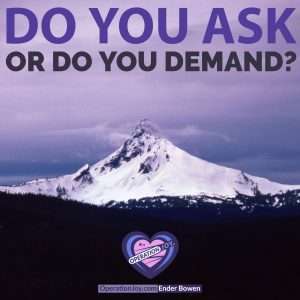 So what can we do about it?

Which wins out? Why do you think this is? What kind of person would demand over and over (a child, right)? Do you get more by demanding or do you get it by asking?

I know you might be thinking, “Well, Ender, I did it, and though I demanded plenty of times, asking won out.”

That’s great. But it should be a shut out. That is what you should work toward.

After all, how could you ask more of your own child than you require of yourself?

There was something very interesting I noticed when performing this task myself. Though I always corrected my daughter when she demanded, I never noticed how much I demanded of her rather than asking.

“Get in the bathtub.”

“Put that down and come to dinner.”

Or my favorite: making no noise at all and simply pointing to the spot I want her to be. You know… with those threatening eyes.

Even when I pulled her aside and explained to her the proper way to behave – I didn’t behave that way in explaining it!

Earlier I asked “What kind of a person would demand over and over?” and I implied “a child”.

But they have to get it from somewhere…

Did you try this mission? What did you find out? Did you demand at all? Did asking win out? Was there enough demanding that it surprised you? Did you find you acted like this more with certain people and less with others? Why might that be? What do you intend to do about it?