How To Get Rid Of Worry And Start Living

by Ender Bowen / Wednesday, 23 March 2016 / Published in Inspire Yourself

While worry has evolutionary roots in our ability to predict and thus prepare for the future, in its present form it’s something we can choose whether or not to acknowledge.

How Much Of Your Life Is Wasted By Worry?


Did you know we spend – on average – anywhere from 5 to 6.5 years of our lives worrying? And did you know that not only does 85% of the stuff we worry about never happen but if/when it does, we tend to handle it okay?

This study obviously did not take me into account.

At least once a week I’m kept awake well past bedtime because some worry – usually revolving around the safety or health of my children (being a parent multiplies worry in inconceivable ways) – won’t get the heck out of my head and leave me alone.

It’s a hard thing to deal with sometimes. It’s not crippling for me, mind you, but every now and then it can certainly slow my productivity and creativity down. I don’t like that.

Understanding The Roots Of Worry

The thing is, while worry has evolutionary roots in our ability to predict and thus prepare for the future, in its present form it’s actually something we can choose whether or not to acknowledge. 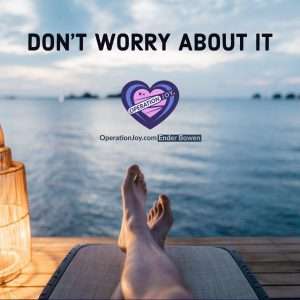 So when you feel that big worry beast taking hold, try asking yourself these questions:

If you keep asking yourself these kinds of questions, it won’t take long for you to see that there’s no benefit in worrying.

Believe it or not, your brain is engineered in such a way that it if it sees something as useless, unnecessary or lacking for benefit, it won’t pay as much attention to it. You just have to convince it of that.

Or, in this case, trick it just a tad.

When you start to worry, try acknowledging to yourself that that is actually what you are doing. Let your brain know. Ask it some leading questions. Don’t feed the beast.

It might take some time and some practice, but you’ll be surprised at the results.

When have you let worry paralyze you or keep you from being productive? What is it you worried about, and did you really need to? When have you felt yourself worrying, but didn’t let it control you? How did you defeat it? What were you able to do as a result? Share your experience below!