If You Expect To Receive More, Expect To Give More

While you absolutely deserve to be happy, that doesn’t mean it’s just going to come to you. Not only do you have to do the work yourself, but if you aren’t willing to give more to others, why would you expect to receive more from them?

When I was growing up, my mother instilled in me the idea that if you want to be successful, you need to do the work. Sometimes you need to work hard.

Of course, if she read that sentence right now she’d probably chuckle. Working hard was not my thing as a teenager. I wouldn’t necessarily say that I slacked off or didn’t do any work – I did indeed put a lot of time and effort into things… but they were the things that I wanted to do. I wasn’t much interested in chores or homework or maintaining a clean bedroom.

Or clothing myself in anything resembling actual clothes.

I suppose that’s really not much different from any other teenager, of any generation.

Still, these days it seems as though many folks – even adults – feel as though they’re entitled to getting things. I don’t necessarily mean that hot sports car or that big house or that ideal job (though, that’s part of it). I’m talking about friends supporting their projects or showing up to their wedding. Or random people listening to their music just because they put it out (guilty). Or having their back when they get themselves into some (minor) trouble.

How about friends and family bending over backwards to help out when they don’t feel good? Or maybe when they’re just looking for attention?

To put it another way, people nowadays feel entitled to their perception of happiness. Not just the pursuit of it, but the actual happiness itself.

But, I’m here to tell you, while I believe you absolutely deserve to be happy, that doesn’t mean it’s just going to come to you.

Not if you don’t put the work in.

Hey, It Will Come Back Around

When I was in college, my closest friends instilled in me the idea of “hey, it will come back around”.

If we went out for some drinks on a Tuesday night and one of us was short on cash, one or all of the rest of us would pitch in for him for the night. Because, “hey, it will come back around”.

If one of us needed help moving in or out of a room, we’d all do some heavy lifting because, “hey, it will come back around”.

If one of us got far too hammered the night before a big exam, one of us would pose as him and take said test.

I’m kidding — we never got that hammered.

What made this philosophy so great was that there was never any expectation of the traditional “paying someone back”. But it wasn’t necessarily considered a “favor” either. Today, you need help. Tomorrow, I will. I’m going to give of myself to you today and not worry about it. Because later on down the line, I know you’ll help me out. Not because you owe me – but because that’s what we do.

It’s a philosophy I still adhere to.

Why You Should Expect To Give More

People these days seem to think that being happy – or even just content – is something they’re entitled to. But I don’t believe that’s the case. I believe in the pursuit of happiness, but that pursuit requires you to do the work. 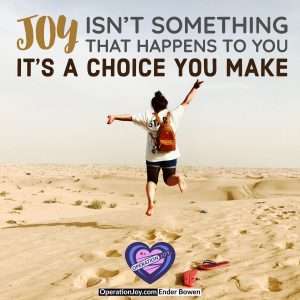 I would love for everyone to get what they want out of life, of course. But at the end of the day, I can’t ultimately do that for you. No one person or group of people can be your entire resource for Joy. That’s something you have to do the work to receive.

And that’s why, if you expect to receive more, you should expect to give more.

The whole idea is that you get out what you put in. It’s not a karma thing. It’s not a “rule of the universe”.

It’s a state of mind.

This is another big philosophy for me: I don’t ever expect from other people something that I am unwilling to do myself. If I’m not going to put time (of any kind) into someone else, why would I expect someone else to put time in for me?

No, just because you give more, that doesn’t in reality mean the universe is going to grant you opportunities to receive more. That’s not what this is about.

This is about one simple thing: be the person you want others to be to you.

Lastly, here’s one more word of advice: Joy is a choice you make, not something that happens to you. Don’t rely on others to bring Joy to you. Do the work to make Joy manifest in your own life. When you do, trust me, it will spread and manifest itself in the lives of others.

And it will, truly, come back around.

Can you identify some places in your life where you aren’t content enough? What do you think you could do about that? Have you tried the “hey, it will come back around” philosophy? How has that worked for you? When have you found yourself depending on someone else for your happiness? Where could you put more work into your own Joy?