Why Asking For Help Makes You Courageous

Asking For Help To Accomplish Your Dreams

My high school days were filled with little more than trying to accomplish this mission. That meant I was reaching out and asking for help on a fairly regular basis. Here and there I found some success… for a few days. Yet, when I was 16, I was lucky enough to play drums in a pop metal outfit called The Waffle Senate, which lasted for a couple years.

But beyond that, the area in which I grew up offered little in the way of aspiring rock musicians, and even fewer places to play should one actually get a band together. This was particularly difficult and frustrating for me.

By the time I was 19, having failed several times at trying to assemble the world’s greatest rock band (or… you know… one that stuck together and actually played for more than a couple weeks), I decided that if any of this was going to happen I had to stop depending on others and just do it myself.

Asking For Help To Get Started

That didn’t mean I stopped asking for help. At least, not right away.

I asked Waffle Senate guitarist Grim if I could borrow his four track recorder to make demos (and eventually asked him if he’d play a solo on “Echo Papa” because, quite frankly, I couldn’t play guitar very well).

I asked my high school music teacher if I could use the band room to record drums.

In college, I asked my immediate supervisor in the information technology department (where I worked) if I could run the music lab so that I could gain access to equipment whenever I wanted to use it.

All of this assistance played a huge part in me getting my first album done in 2001.

But, once again, I was finding trouble getting a band together, even in college. The most I was able to do was gather a ragtag group of very talented people and rehearse a few times. And though I did get approval from the student board to play at Spring Fest (the annual end-of-year party in the school’s quad) I was never able to hold a band together long enough to actually perform at the show.

Meanwhile, I was depending on myself more and more to accomplish my goals. Where depending on others was continuously leaving me a bit sour and without anything to show for it, depending on only myself to complete projects yielded an EP and two more albums in the span of four years.

Why in the world did I need anyone else?

The final nail in the “depending on other people” coffin came in late 2008 when, after two years as an artist at an independent record label in Nashville, I realized that there was nothing that I could depend on them for. As a matter of fact, they weren’t doing anything (I could stop that sentence right there) that I couldn’t do myself. Heck, I released less music with them in two years (to be specific, I recorded and released no music) than I did on my own in four (again, just so we’re keeping track, three albums and an EP).

So I asked for my release and decided to do my own thing.

“Doing my own thing” became, over the following decade, a bit of a cancer. I’d take over parts of projects with which I was involved because I knew if I did them, they’d get done. I made myself responsible for work that I couldn’t possibly handle myself. For instance, when I was a member of the Common Sense For Dummys comedy troupe, I was writing, producing and planning (with others, thankfully), but then on-set I was acting, running camera, running sound, handling lighting and so on — pretty much alone. Then in post, I was handling the video editing.

Sure, I could do these things. But did I need to? Shouldn’t I have been asking for help? It was certainly offered on many an occasion!

But it wasn’t just projects that I took over – it was my everyday life too! If there were errands that needed to be run, or everyday chores that needed to be done, I just did them myself. As a result, I got busy and frustrated and wondering why I had no time to do the things I wanted to do.

The interesting tidbit here is that my wife is much the same… because she’s been through a lot of the same experiences! The result of two people deciding they need to do everything themselves without asking for help is that they tend to get resentful of the other person because the other person isn’t helping!

At a certain point, I was just too proud to think I needed any help.

Asking For Help Makes You Courageous!

The thing is, we each tend to get ourselves to a place where we refuse to ask for help. Maybe it’s a matter of pride. Or a matter of the experiences we’ve had. Maybe it’s fear. I think, in many ways, my eagerness to take over all aspects of a project was because I was terribly afraid that if I wasn’t handling it, it either wouldn’t get done or it wouldn’t get done correctly. 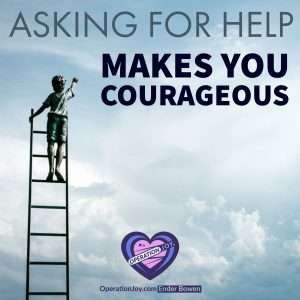 That’s no way to live. Not in your professional life and certainly not in your personal one.

What is most fascinating about this is that I’m sitting here saying I did all of this on my own, but if I really looked back and thought about it, that’s a complete lie. Nothing I ever accomplished was done alone. I didn’t take the pictures on my first albums, others did. I didn’t print the CDs and ship them out, mp3.com or Cafepress did. There were other talents involved in Common Sense for Dummys besides me. And I didn’t make children on my own either.

And you haven’t been the whole time.

At the end of the day, fear is what keeps you from asking for help. You may think that by doing everything yourself that you are taking and keeping control. But it’s actually fear that’s controlling you.

Let go of that fear. Be courageous. Ask for help!