Why You Feel Powerless (And What To Do About It)

by Ender Bowen / Wednesday, 05 April 2017 / Published in Inspire Yourself

You don’t have to feel powerless. The world is malleable. So bend it to your will.

One Of The Worst Things To Feel

When the alarm clock rings in the morning, you’ve already lost control of your day. You’d like to sleep in, but you can’t. You move like an undead zombie as you go through your morning routines, take care of the kids, and head on to work. And you labor through the day, just so you can do it all over again. You feel powerless, helpless and hopeless. Like the world has you at its mercy. You have no say in things. You’re just dragged along at the wrist, like a little kid looking up at his father saying “where are we going?”

The worst part is that it’s been going on for far too long. You thought way-back-when that you would have been able to break out by now. But you’re still here, doing the same things.

If only the world would back off and give you a chance to move in another direction.

I know how this feels. It’s one of the worst feelings in the world. It’s like you’re not living your life – like someone or something else has complete control over it. You’re just a vagabond aimlessly stalking the streets of Life.

Why Do You Feel Powerless?

This is not what you expected to be doing with your life. You had dreams, expectations and plans. But as you’ve gotten older, you’ve come into more responsibilities, and your time has gotten eaten up tending to them. At the end of the day there’s no time left over for yourself and your wants. There’s not enough disposable income to go out for a nice dinner or escape on a vacation. Or see the latest Hollywood cinematic reboot of The Golden Girls.

You feel powerless because you feel stuck. You don’t get to make any choices – they’re all made for you.

And the worst part about that – the further removed you are from making decisions or having to even think – the harder it is to make choices at all, and the more terrifying it is to even have to think about making them.

As all of this mounts, how could you even conceive of being able to break out?

You Don’t Have To Feel Powerless

To an extent you’re right. There is such a thing as powerlessness. And much of it is brought on by a sense of responsibility. After all, if you weren’t a responsible person you wouldn’t feel it necessary perform the duties you’re responsible for. You’d essentially be free to do whatever you want.

Being a responsible person is a good thing.

But you don’t have to feel powerless because of it. And that’s because you aren’t powerless.

The first thing you need to understand is that being a responsible person makes you an asset in the world. The world – and the people in it – need others like you that it can depend on.

The second thing you need to understand is that being responsible is not something you have to do – it’s something you choose to do. No one forced it upon you. No matter what responsibilities or duties have come your way, you could have said no. Many people do. But you chose to take them on. Not only is this a wonderful character trait but it’s also something that should give you a sense of empowerment.

So, to clarify, responsibility doesn’t make you powerless. It empowers you!

The World Is Malleable

Now that you have a sense of empowerment, what do you do with it? It still feels like the world is against you. It still seems like the universe is trying to bring you down and destroy you. No matter how empowered you feel, how are you supposed to fight that? 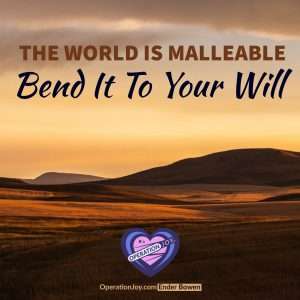 First of all, the world isn’t against you. It isn’t for you, either. The world keeps on moving with or without you. But because you’re you and you see it from a particular perspective, it’s natural to feel like the world specifically has your number.

You’re just a microbe pushed along with the rush of the current.

But it isn’t. Though it certainly takes strength – mental, physical, and of character – the current isn’t all-powerful. You can swim against it. You can go the opposite direction. The water in this river of Life is not solid. It can be resisted.

In the same way, the world is not unbreakable. It is not a hard, steel surface.

The world is malleable. So bend it to your will.

There are many ways to do this. But you can start by acknowledging that your sense of responsibility empowers you. Not only are you good, but you’re good at it. Use that power as the initial source of your strength, and build upon it.

And though the world is indeed malleable, it will be tougher for some to bend than it will be for others. Just like the amount of work, drive and dedication it takes to be a world class weightlifter, the tougher the world is to bend, the harder you’ll have to work.

But here’s the great thing about that – working hard is nothing new to you. You’re a responsible person. You already work hard.

Time to break out, and show the world what that means.