Why You Should Always Present Your True Self

While it’s an admirable and smart strategy to know as much as you can about a person in an attempt to connect, you should always be and present you. Bring yourself to the party.

It’s Not Easy To Present Yourself

I can tend to come off a bit socially awkward. It’s not necessarily that I’m trying to impress people (although that’s an important part of the networking business). Sometimes it’s more that I’m very cognizant of what I say and do because I don’t want to insult or offend someone.

Which is bizarre, to say the least — I’m not really an offensive type.

Then again I suppose that depends on who you talk to. (Don’t talk to my wife!)

Most of the time, however, I like to hang back a bit when I first meet people. I like to let them present themselves so that I can get an idea of who they are, where they’re coming from and what the rhythm of their conversation is. I’m looking for the place to connect. It could be as simple as a similar interest in television shows, or as complicated as a suggestion of an idea upon which I can expand.

In the end, it’s about making that other person feel comfortable, more than it is about my own comfort. It’s about acknowledging that I’m paying attention to what they’re saying, what they’re doing and, ultimately, who they are.

At the same time, there’s always the possibility that either I won’t find that place to connect, or I won’t open up and bring myself – my real self – into the conversation.

When that happens, who are you really benefitting? What are you accomplishing?

Why Present Yourself In The First Place

The whole reason you want to bring yourself – whether it’s to an event, an introduction, a new friendship, a party, a rock band, church (just about anywhere you can be included) – is to facilitate a relationship.

It’s also very much a component of Compassionate interaction. If you don’t bring yourself, then the other person is getting to know this fake you. It’s one thing to be respectful and to genuinely want the other person to be comfortable —

— But that doesn’t mean you sacrifice who you are.

Are you networking? Relax. Be yourself. Worry less about what this or that person thinks of you. Show them who you really are. That’s what they’re looking for!

Attending a new church for the first time? A new club? Show them you. What kind of club would you want to be in that wouldn’t accept someone like you anyway?

Have you been set up on a blind date? Don’t be nervous. Just be yourself! (Or run!)

Are you seeing a pattern?

It’s as simple as just being honest. Both to others and to yourself.

It’s also about building bridges. And sometimes that means you have to lead.

What Happens When You Present Yourself 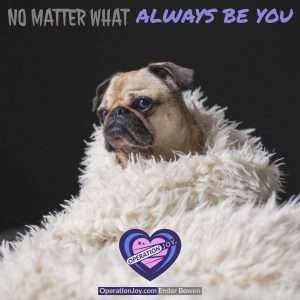 Apart from being a rock star, of course.

Rather than try and figure me out, my step father instead brought himself forward – essentially forcing me to get to know him.

On the surface it’s understandable to see this as maybe a backwards way of doing things. But I don’t. After all, you can go to concert band performances and pee wee baseball games all day long, but showing support is not the same thing as connecting, and support alone isn’t going to build a relationship.

So he took myself and my brother metal detecting along the St. Lawrence River. There, nearby old forts and battle grounds, we discovered his love of history.

He brought his entire collection of movies over for us to watch. And when new movies came out, he’d rent them and we’d all watch them together – or we’d go see them. There, in the living room and local theaters, we discovered his love of movies and television.

And on and on.

Did I mention, by the way, that we discovered our own love for these things too?

Why You Should Bring Yourself To The Party

It’s amazing what can happen when you just bring yourself. When you just jump right out and give who you are to others. Very much like the gift you are!

By opening himself up, my step father opened me up, and ultimately helped me to learn more about myself.

Meanwhile, I could see a genuine effort at wanting to connect. That went a long way to me being willing to accept it, and to want to reciprocate.

While it’s an admirable and smart strategy to know as much as you can about a person in an attempt to connect, you should always be and present you. Bring yourself to the party. That way, at the very least, the person on the other end understands you’re giving of yourself, which if nothing else makes it easier to give of themselves too.