Why You Should Prepare For “Nonetheless”

“This shouldn’t be happening.”

“I should be famous by now.”

“So and so should know better.”

“I shouldn’t still be stuck in this rut!”

I have said all of these things, and plenty of things like it, many times in my life. I’ve had moments of surreality (hey that must be a real word because it didn’t spell check me!) where I couldn’t believe where I was and what I – or someone I was with – was doing. I’ve experienced people say and do things that I wouldn’t have imagined they would ever say or do. Heck, I’ve been that person from time to time.

I should be treated with more respect!

Should. Shouldn’t. At the end of the day, they don’t matter.

One of the ways that “Nonetheless” messes with your perception of “should” or “shouldn’t” revolves around human behavior.

“He’s my best friend. He shouldn’t have said that about me.”

“She’s my wife. She should know I would never do that.”

Or what about this one: “I should know better. Why did I do that?”

We have expectations about people – be they loved ones, friends, family, ourselves. People that we know – or think we know – very well. This is the kind of person so-and-so is, therefore, so-and-so should do this. So-and-so should say that.

But that’s not always how it happens. Sometimes people act in ways that appear completely counter to who they are.

That doesn’t mean throw your hands in the air and say “Well… shit. What am I to do about that? Expect the worst of the people I care most about?”

Absolutely not. What you do is recognize it. Acknowledge these things as being part of human nature. Be prepared. Soften the blow.

Someone I care very much about was once up for a job that she was absolutely – and I mean to the letter – qualified for. She knew the right people, had more than one spotless interview, and was completely prepared to receive that hire offer. 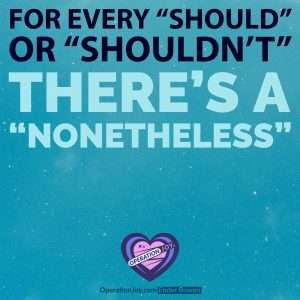 But it never came.

To all accounts, she should have gotten that job. Nonetheless, she didn’t. And she was heartbroken.

I remember when I signed my recording contract back in early 2007. I had already released 3 albums and an EP on my own. Now that I had the “machine” behind me, I was prepared to take that to the next level.

But that didn’t happen. In fact, I didn’t release one album or even record one song with that company the entire two years I was with them.

In my mind, however, I should have. This should have been the thing that would allow me to break out. Finally. Nonetheless, it wasn’t.

Sometimes, no matter what the facts appear to suggest, life acts in ways completely counter to what you would expect. That’s actually a fact that more than trumps all the other ones you may have gathered around you.

So what are you to do?

The Negative Of “Nonetheless”

All of the above might lead one to be completely distrustful of their own instincts. Perhaps with the unpredictability of “nonetheless” you’ll always expect something terrible to happen, or maybe you’ll be waiting anxiously for the other shoe to drop.

That’s because this is exactly what “nonetheless” can do to you.

It makes you suspicious, bitter, angry, sad, depressed, spiteful, vengeful, covetous, jealous, and envious. All of this together can lead to paranoia and fear.

But it doesn’t need to be that way.

There’s a difference between awareness and worry.

Worry means you get to the point where you’re nibbling away your nails at the slightest hint of something being off. Or maybe you don’t need a hint. Maybe you just go right from zero to 100 thinking about every possible bad scenario (guilty).

Awareness, however, means you acknowledge that this “nonetheless” exists. You know things might not work out, and you’re going to make sure you’re prepared for it. That’s just being smart and strategic about your possibilities.

Surely you’ve heard of “hope for the best, prepare for the worst”. That certainly applies here.

The Positive Of “Nonetheless”

There are positive ways that this can work, too. Ways that you can use “nonetheless” to your advantage – beyond just a simple awareness.

For instance, maybe your “should” or “shouldn’t” regarding another person is such that you always expect something bad from him or her. In other words, you’ve convinced yourself that so-and-so has nothing positive to offer, thus you always view him or her in a negative light.

So-and-so’s “nonetheless” may surprise you in positive ways you aren’t expecting.

Remember this from earlier? “I should know better. Why did I do that?” Nonetheless, you did that. Maybe you keep doing that.

Your “nonetheless”, then, represents a challenge. The degree to which you meet that challenge is entirely up to you – but it can be met, and overcome. That is, after all, part of why “nonetheless” exists.

Lastly, what about the “should”s and “shouldn’t”s of life itself?

The first thing I’ll say to this is simply that “nonetheless” comes to you in ways you don’t think you deserve. If that can happen in the negative, it can happen in the positive, too. You may think you shouldn’t deserve happiness and Joy – in whatever way you perceive that – but you do.

You can and will have it. Just be know that life will throw it at you when you aren’t expecting it. Be aware enough to recognize and act on it.

But the main thing to keep in mind when it comes to “should”, “shouldn’t”, and “nonetheless”, is that no matter what we do, no matter what we think, perceive or expect — life, and the people who live it, will always find ways to confound those expectations.

The sooner we can identify a “should” or “shouldn’t”, the sooner we can be prepared for a “nonetheless”. We can stop living by the negative energy this produces within us, and start moving toward something more positive, where “nonetheless” doesn’t pull us down, but instead lifts us up.