Why You Should Stop Saying “I Don’t Know”

by Ender Bowen / Monday, 09 January 2017 / Published in Inspire Yourself

If you say “I Don’t Know” a lot, there’s a reason you feel helpless, powerless, and immobilized.

If you are finding that you often feel helpless or hopeless, ask yourself how many times a day you say the phrase “I don’t know”. You probably aren’t even really aware of how often you do it. Maybe you don’t always necessarily say it – maybe you just shrug your shoulders or say “um…” and let it be.

Take a listen to yourself today and see how many times you say it. How many different types of things do you say it to?

“What do you want for dinner?”

“Should we take Addie’s blanket?”

“How many times a day do you say the phrase ‘I don’t know’?”

See what I did there?

But, seriously, count it all up today and look it over tonight. Also, consider the fact that because this was brought to your attention, it’s highly possible you didn’t say it as much today as you typically do. So add a couple more onto your list when you’re done.

You Feel Helpless Because You Keep Giving Up

Now I want you to think about how often you find yourself feeling helpless and hopeless. How much time do you spend lamenting over the idea that you don’t have control over your life? How immobilized are you by this idea? 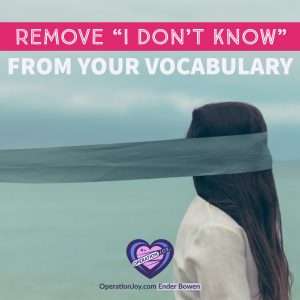 Do you feel like you’re going nowhere and don’t have the power to do anything about it?

Look at that list again. How often do you say “I don’t know”?

If you say it a lot, there’s a reason you feel helpless, powerless, and immobilized.

That’s because the act of saying “I don’t know” is akin to throwing your hands in the air, giving up and walking away.

What, exactly, do you think you’re giving up when you do this?

What Happens When You Give Up Power

So stop saying “I don’t know”.

Because the truth of the matter is you do know. If not by knowledge then by instinct.

“What do you want for dinner?”

Pick something. Go grab it.

“Should we take Addie’s blanket?”

Empower yourself to make those choices.

And look, I get it – having to choose, making decisions, especially in today’s society, is neverending and completely exhausting.

But that doesn’t mean you have to give your power away.

And if you really, truly, don’t know the answer to something – find out! Empower yourself to gain that knowledge and information.

Empower Yourself To Make Decisions

Maybe you’ve started to notice this already, but the things you’re most often saying “I don’t know” to are really pretty trivial. At the end of the day, they don’t really make that much of a difference.

But making a decision about those trivial things certainly makes a difference in you!

Saying “I don’t know” creates a sense of helplessness. So empower yourself by removing this phrase from your vocabulary, and watch how quickly your mindset changes.

When you’ve found yourself saying “I don’t know”, what have you done in the past to fight it off and do something? What tricks do you know that have kept you from throwing up your hands and giving up at even the most trivial of decisions? Share your experience below!