How To Make A Difference On A Small Scale

This week, in an effort to open the Operation Joy floor to other voices, and other means of inspiring Joy, I’m sharing a special guest blog by Emily Steele (@TheEmilySteele).

Feeding The Body And Soul

Our church runs a food for the needy mission called Body & Soul. No requirements for who is allowed to partake. You only need to be hungry and have a need. No paystubs to show. No residence to prove. “Leave what you will not use, but take what you will.” It’s a relatively new group at our church but it’s already doing wonderful things for the people in our community. Recently, one of the women in charge of this organization informed us that about 20 to-go containers of chicken and salmon dinners had been donated to the mission to be distributed to those in need. The woman asked for anyone who knew of someone in need of a meal to please take one.

At first, I tried to think if there was someone I knew personally who needed some extra food. No one came to mind. Then I remembered a man who often sits by the exit road of a shopping plaza near me. He sits in one of those folding chairs that you might take to your kid’s baseball game. It’s pretty worn and I have grave doubts to its ability to survive the rest of the winter. He keeps everything he owns in a ratty old backpack that I assume was once a sleek black color but has turned gray from years of being outside. He usually has a cardboard sign. It has different messages depending on the day but the message is always the same. “Please help.” I decided that I would take one of these boxes and give this man a meal.

However, on my way home, I passed another man standing in the small patch of grass between the off- and on-ramps to the interstate. He was a young man, probably the same age as me. He stood there with a sign that I couldn’t read because he was faced away from me. But I didn’t need to see the words. I knew the message. This man was hungry and looking for help. I couldn’t drive away knowing there was a need right in front of me and I had something that could fulfill it, at least for the moment. I pulled up behind him, rolled down the window and called for his attention. I handed him the box. He thanked me and said “God bless you.” As I drove away, I caught a glimpse of him hungrily devouring the contents. 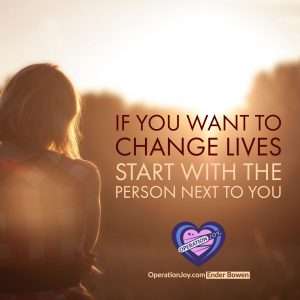 But what about the man who I had intended to give the meal to? Sure, he had no idea that I even exist, much less that I had planned on bringing him lunch. He didn’t know that his meal had been given to someone else. But I knew. And I couldn’t seem to shake the thought of this man going without food because I gave his meal to someone else.

That’s when I remembered my husband’s blog. I remembered how Ender always talks about inspiring joy in others. He once said “The truth is, the sooner we understand that here on Earth God truly doesn’t lack for resources, the sooner we could do some amazing things.” OK so I didn’t have the to-go box with a complete dinner in it anymore. But I did have a few extra dollars on my Dunkin’ app. So I pulled into the Dunkin’ near the plaza where this man stands and ordered a bagel with cream cheese and a hot coffee. And when I saw this man in his usual spot, I handed him his meal. He smiled, thanked me, and told me to have a blessed day.

Did I change this man’s life? No. Could have done more for him? Probably. Did a bagel and coffee restore his faith in humanity? I highly doubt it. But much like the man who received the boxed dinner, this man was able to have at least a few minutes of joy in his day. And what did it cost me? $3.00 and the change? Just an extra item to my order somewhere I was planning to stop anyway.

I wasn’t able to do everything I would have liked to for these men. But I was able to do something. And I can do it again. How much more will it set me back to order an extra burger or box of nuggets the next time we’re taking the kids to McDonald’s? Sadly, with the homeless situation rising at the alarming rates it is in Nashville, chances are I won’t have to drive far to find someone who could use it. How much will it cost me to pick up a few snacks during my next Kroger run and keep them in the car to hand out when I see one of these folks that, most other times, I would have just driven by?

Thank you to my husband, Ender Bowen, for reminding me that I do have the ability to do amazing things. Thank you for inspiring me to inspire joy in others.

I firstly want to thank Emily for sharing this post. And I’m deeply humbled that she was inspired by something I said. That’s an amazing feeling. It’s funny, I remember when she was on the way home that particular day and had texted me saying that I had inspired her to do something today. I hadn’t expected that it was something like this. I don’t know what I had expected, to be honest. This made my day, my week, and months to come.

The thing is (and I’m sure I’m going to come back to this again at some point), I know we all want to do amazing things. But so often we sit on our hands either because we don’t know what to do, or because we feel what we do won’t be enough. We get immobilized by the idea that we, alone, can’t save the world. That what we do isn’t enough.

Here’s a spoiler alert: It’s not enough. But what Emily did here was enough… for that person… for one day.

Helping people, and changing people’s lives, is not one-size-fits-all-I-me-we-can-save-the-world-if-I-me-we-just-gather-the-resources-and-don’t-give-up —

Don’t sit on your hands. Don’t not help that one person you know today because you’re waiting to help everyone tomorrow.

It’s okay that it’s not enough.

Because it is enough today.